A long time ago, I lived with a psychiatrist. A friend had given him a joke gift: a book offering interpretations of 1,001 dreams. Right there, in the top five, I found the dream of losing your teeth. I’d had this one often. The book claimed it suggested things like a fear of death, a loss of innocence or something weird about your sexuality.

“What does dreaming about losing your teeth mean?” I quizzed my shrink-boyfriend. I had a suspicion, and I wanted his professional opinion.

“I don’t know,” he said, “that you’re cwazy?” He meant to sound like Elmer Fudd.

When it comes to teeth, I may be crazy.

I was a small, angular kid. I didn’t think much about my body; when I considered my appearance, I focused on the two front teeth that dominated my face, my life, my dreams.

Those teeth were planks. They set off in different directions, closer together at the top and then drifting apart below. I learned, only when fully grown, that I had an overbite. In one small blessing of a tooth-vexed childhood, I didn’t realize not everyone’s teeth hung over the bottom row.

When people used the word “teeth” I assumed they were talking about me, and I’d pull my thin lips tight. When I laughed, I raised my hand to shroud my mouth.

My friends got braces. I envied their glistening, latticed smiles. My parents couldn’t afford orthodonture, which my father declared a scheme to prey on the insecurities and superficial values of the bourgeoisie.

In my mid-20s, I avoided dentists until I married a big, handsome man, with big, handsome teeth that were cared for by a woman named Amy. I hadn’t gone to the dentist for many years, but thought I might be able to go to one named Amy.

Dr. Ludwig, a smart and stylish Ivy Leaguer, quick to laugh with her startling blue eyes, was just starting out in her uncle’s high-end practice. Going to her office in an elegant building near Rockefeller Center, you never knew who you’d see in the elevator; her patients included Mets, an opera star from the Met and a TV personality whose teeth I’d scrutinized each week since I was a child.

Dr. Amy administered a local anesthetic to clean my teeth. I didn’t know, until I left Manhattan, that dentists don’t usually clean teeth. Amy babied me and used to say if I ever had a cavity, she didn’t know who it would be harder on, her or me. We both guessed her.

One day, just before she started cleaning, I uttered a sentence I had never spoken aloud. I confessed that I hated my teeth.

Maybe I had misjudged her. Maybe Amy wasn’t so bright.

After I explained, she said, “Why don’t we fix them?”

She could shorten the two front ones, use a bit of resin in the gap, hit it with a laser and that would be that. We made an appointment for the next week.

And for the next week, for the first time in my life, I talked about my teeth. Wouldn’t, in fact, shut up about my teeth. I had raced home and told my husband that Amy had said it would be easy to fix them and not even that expensive. He was surprised I had been bothered by my teeth. He hadn’t noticed a problem.

I told my friends at work, pointing to the hideousness. “Look,” I’d say, opening wide. They’d shrug and say they guessed it was a good thing I was getting them fixed if I was that unhappy.

Finally, I told my mother. After years of begging for braces, a lifetime of not wanting to be photographed and never smiling for the camera, I was, I said, on the verge of having a new identity. She said, “You have a gap between your teeth?”

The first time I saw my mother after my teeth had been fixed, I smiled at her like a monkey. She smiled back. I smiled harder. She imitated me (like a monkey). I pointed at my mouth. She pointed at her mouth.

“My teeth, you dummy! Look at my teeth!” I’d been talking about them on the phone for weeks, telling her what a difference getting them fixed had made in my life.

“Oh,” she said, with an abashed, impossibly straight-toothed, smile. “I forgot. They look very nice.”

Now I have another dentist, Kurt Peterson, whose staff fluffs me like Dorothy in Oz. Dr. Kurt listens kindly, gives me happy gas and fixes anything that bothers me, no matter how trivial.

Most of us have some body part that makes us twitchy; for many, it’s teeth. I can give you a detailed topography of all my friends’ mouths. And sometimes I still dream about teeth.

My interpretation has something to do with weakness and vulnerability, how we often magnify flaws that are invisible to others, mostly to our own detriment. 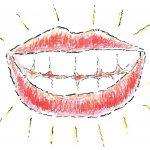