How Can I Say This So We Can Stay in This Car Together?

Mark Twain said many funny, true, quotable things, but among them was not “Everybody talks about the weather, but nobody does anything out it.” He simply repeated the quip of his friend, Charles Dudley Warner. But it’s nonetheless true. Especially during extreme changes in climate, we sure can spend a lot of time talking about something whose outcome we are can affect not at all.

Just as some of us can enjoy hours discussing spectator sports. We weigh in with opinions about players and coaches, curse out refs, and bond in good fellowship.

This is how I feel about the political conversations I try to opt out of these days.

Most of the people I’m in contact with are well-informed and concerned about current events. Most of us have strong opinions about what needs to be changed and what we want to see happen. It’s important, I know, for folks to able to vent among like-minded people.

Until Nov. 9, 2016, some of us were not particularly interested in party politics. Then we got energized by working on local campaigns. I’ve become a member of a couple of different groups where people get together to talk about what is to be done. And I’ve often been frustrated by the way the conversations look.

At those meetings I’ve mentioned the NPR “On Being” podcast with Claudia Rankine called “How Can I Say This So We Can Stay in This Car Together?” In an interview, Rankine, now as famous as it’s possible for a poet to become, describes being picked up at an airport and driven two hours to the campus where she was invited to give a graduation speech. She asked her white, working-class driver if she had voted for the current president.

The woman said yes, and began to talk about what mattered to her. She spoke about her life, which was very different from that of the black Yale professor, who had to figure out from context what a “double-wide” was.

The issue Rankine raises in the interview is how we can learn to talk and listen to people unlike us; how we can have conversations that are real discussions and not just taking turns spouting opinions and pissing each other off.

What I’m wondering about these days is how small groups of people can act as microcosms of – and perhaps workshops for – what’s going on nationally. At one meeting, someone made a grand claim for the diversity found in Spokane. A young, black, queer, trans man who uses they/them/their pronouns said, “Well, I feel pretty lonely here.”

We drove through that uncomfortable moment, even though some of us wanted to jump out of the car. What would it have looked like if we’d slowed things down. What if each of us had a chance to explain, “This is what it’s like to be me”? What if we asked each other questions and listened to the answers? Really listened.

In every meeting I sit through, I notice who does the talking and who remains silent. Do we get a good representation of all the opinions and ideas in the room, or are some people doing more than their fair share of sharing? Who gets interrupted? Who filibusters? Who makes jokes that derail the conversation? Who rambles on about personal experiences that may be decades out of date?

In every class I teach there are students confident enough to talk and others, often the smartest and most nuanced thinkers, who sit in silence. For that reason, I ask each person to wait for three or more others to speak before they chime in again. I’m always wondering about better ways to make sure that everyone gets to participate.

For much of my life I have kept quiet in large groups. I know I’m better on the page than I am in person; I can get kind of heated. At this point, though, I’m old enough to care a whole lot less about whether I’m likable. As a woman, I know I’m always going to be held to that standard, especially as someone with sharp features and an even sharper tongue, who never learned the art of indirect and politic speech.

In the past I made the category error of believing that people who didn’t share my values were misguided and if I just educated them, they would come around. What that means is I wasn’t listening (and, yes, that I was as arrogant as I was obtuse). What we learned in 2016 is that plenty of people feel condescended to by well-intentioned pedants. Instead of engaging in conversations that are uncomfortable, these folks simply say nothing and then vote for people not like us. Many progressives who believe themselves to be “woke” have been, in fact, asleep and unaware.

The question I keep asking myself is: What have I missed? What am I not seeing and hearing and how can I learn to listen?

And the mantra that now guides me: How can I say this so we can stay in this car together?

We met in the Clark Fork. That’s the Clark Fork of the Columbia River. I had gone back to school for a graduate degree, was training hard for a 50-mile trail race, and was wearing only tiny shorts and a running bra. I’d just finished a long run and had gone down to the river to soak my middle-aged legs in the rush and gurgle of nippy water. I kicked off my running shoes and picked my way gingerly through the rocks that lined the shore, yelping at the cold, my arms helicoptering to keep from falling. The air was hot, the sun soaked my skin, and soon enough my legs were comfortably numb. A trio of fisherman stood in the water up river. This is not unusual, even in the middle of town. Missoula, Montana is a town where people do things like run 50-mile races and stand in rivers in deep summer.

Next thing, one of the fisherman, a white guy and older than the other two, had moved downstream. I heard him call out to the young fellows: “No question about it, this is the best view you’ll get fishing anywhere.”

His view was of the traffic going over the bridge, the hotel behind him, and, well, me. 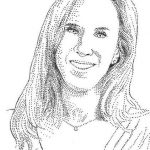